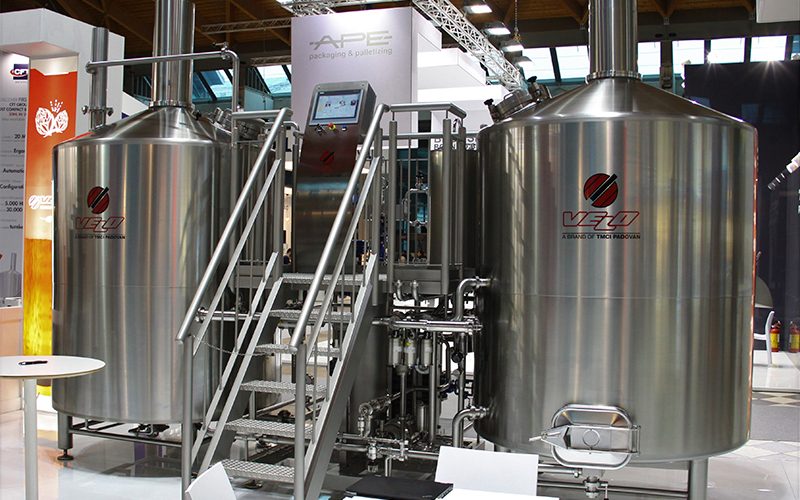 The Beer Attraction Fair in Rimini, Italy, is a long-standing tradition in Italy, and it is a rather unique fair as it covers not only beer and breweries, but also gastronomy and the supplying industries. At the SBR we do not usually cover the Beer Attraction, but this year our colleague Niels Buchwald had been invited by the organizers of Beer Attraction Rimini along with brewers from other countries transport and accommodation was paid for and a dedicated VIP-area for the invited guests was available. As the purpose of inviting these guests obviously was to create more international awareness of the Beer Attraction fair, so Niels felt like paying his dues by documenting his observations in an article for the SBR. For this, we are very grateful and equally pleased to bring Niels’ article below. Coincidently, your technical editor was also attending the fair in an effort both to promote the sale of Kissmeyer Beer in Italy – we had a neat and dedicated stand there, shown on one of the photos in the article – and I can add to Niels observations that exactly the combination of a traditional beer festival showcasing breweries and offering beer samples and a professional trade fair is very appealing and charming, so a trip to Rimini, which is always appealing to anyone with a love of the good things in life, might as well be planned to coincide with the Beer Attraction.

As in Scandinavia, there has been a beer revolution in Italy. There are now more than 700 breweries in Italy. Many of the ‘stainless-steel companies’ – i.e. the producers of equipment and machinery for the beverage industries – have changed their focus from the traditional business of supplying wineries and the olive oil industry, and are now focusing on the beer.

The Rimini Fair has undergone a transition over the last few years. It is now a yearly trade fair for beer, gastronomy and the supplying industry – all in one. On the Saturday, it is open to the public, whereas it is a closed trade fair Sunday, Monday and Tuesday. 500 exhibitors cover an immense area, with approximately 100 exhibitors of machinery and 400 exhibitors of beer and gastronomy.

The exhibitors of machinery are all Italian. They each have a stand, like at the BRAU BEVIALE in Nüremberg. This is intimate, and there is room for visiting and discussing technical and commercial issues.

Disclaimer: Unfortunately, one aspect of dealing with Italian suppliers is that not all Italians are good at English, thus there are often misunderstandings. Here is what I believe I was told.

Having just recently purchased an SPX separator ourselves, I had to visit their stand. SPX Flow has produced separators for more than 40 years under the Seital brand, though only for breweries the last 5 years. It was interesting to learn that there are now 4 factories in total around the Seital factory producing separators, all with the same offspring.

Andritz is one of the other manufacturers of separators. Compared to Seital, they purge with CO2 or N2 rather than relying on a mechanical seal to deal with oxygen pickup. All models are belt-driven. They have been on the market for more than 50 years, having made separators for beer since 2007. In 2013, they started export on a large scale, particularly to the USA.

New to me was a micromalting plant for a 500 kg charge. The company Zanin has sold more than 60 of these micromaltings over the last two years. The design is very compact, and the plant can produce any malt from pilsner malt over caramel malt to black malt, according to the representative from Zanin.

There were many suppliers of tanks and brewhouses at the fair. Here are some photos of how it should NOT be done. I will not miscredit the company, only allow myself to remind you all to look closely at the quality. After asking directly, I was informed the tank was ready for dispatch to the client.

LA Inox was a new company to me. They had a 10hl and a 20 hl brewhouse on display. The 20 hl brewhouse was semiautomatic, and I liked what I saw. The company is 35 years old, and they went from wine and olives to beer 10 years ago.

In 2013, the VELO company went into receivership. It was a great pleasure for me to see that the VELO brand was back, under the Padovan brand. Padovan purchased the expertise, drawings and key staff from the old VELO company. They now sell brewhouses and tanks and can supply spares for those of you that have VELO equipment.

An alternative to separators and kieselguhr (diatomaceous earth) filtration is cross-flow micro filtration (CFMF). Della Toffola had a 30 m2 filter on show. It is up to the buyer to decide how many square metres of ceramic membranes to fit into the housing. They could reference filters sold in Italy, Switzerland, France and England. The flux is 10 litres/m2/hour. This is a lot less than figures I have heard of before for making CFMF economically viable. Della Toffola argues that the filter is fully automatic. Hook it up to the tank bottom and let it recirculate the beer via the side inlet until it is bright. Flowrate is not so important, as it can run all night with no surveillance. From an environmental point of view, it is a vast improvement over kieselguhr filtration. I would like to investigate price vs. life expectancy of membranes and cost of energy and cost/hl compared to alternatives.

Italy has a long history of expertise in packaging. There were several manufacturers of filling lines for cans and bottles. Framax had a small line for cans, 6 heads, 1,500 cph. With a labeller in front, a rinser in the block and a seamer at the end, it looked like a perfect fit into a truck for a portable canning line that could travel from brewery to brewery.

CIMEC has an impressive reference list in Denmark. Their latest line is a 4,000 bph line delivered to Braunstein in Køge. Other Danish breweries with CIMEC lines are Skagen, Hornbeer, Amager and Ørbæk.

Another manufacturer is GAI. Their design is quite different, as they supply linear fillers for bottles and cans with a patented design for the pneumatic actuators. 80% is export, primarily to the USA.

ENOS originally invented the linear labeller for self-adhesive labels. They produce more than 1,000 machines per year and have more than 50,000 machines in operation world-wide. They had several machines on display as well as an impressing array of bottles from various companies demonstrating the many possibilities with their machines. I was impressed. There were also many suppliers of draught beer taps, coolers etc. New to me was that Celli had acquired Angram, and that there now with the craft beer boom is a market for the classic hand-pull beer engine for dispensing traditional British cask beer outside the UK.

The beer festival reminded me very much of the Danske Ølentusiasters (Danish Beer Enthusiasts – the Danish beer consumers organization) Beer Festival in Copenhagen. Although it is a closed fair, it was as busy and crowded in the afternoon, as it is in Copenhagen. There is a competition at the fair in many beer categories, and the winners proudly presented their awards at the stands. The competition was arranged by Union Birrai. The chairman of Union Birrai, Simone Monetti, has been active over the last 20 years, tirelessly working for the Italian craft breweries. Union Birrai now represents 150 of the 700 breweries and 250 bars/pubs with craft beer. Their work last year resulted in legislation defining craft beer in Italy (birra artigianale). To be allowed to call beer craft beer in Italy, it must be unfiltered, unpasteurized, and produced by an independent, privately owned brewery with an output of less than 200,000 hls. Union Birrai represents the interests of these breweries, organizes beer competitions and courses, and makes deals on behalf of the members with suppliers. With so many breweries and so little time, I chose to focus on a select few.

Birrificio Italiano is based 40 km. north of Milan. Established 1996, they now produce 7,000 hls annually. They claim to be the first-ever to have dry-hopped a pilsner – the legendary ‘Tipo Pils’, well known way beyond the shores of Italy. It was very pleasant, hopped only with German hops. They have recently launched a new line of beers in cooperation with two oenologists, under the brand Klan Barrique. The beer is moved 300 km. from the brewery to a cellar where it is aged in large barrels for months. For instance, a classic Weizen is infused with 10-20 litres from a ‘mother-barrel’ and is then aged for 6 months in a 1,000 litre barrel, creating BRQ B.I. Weizen, with a very pleasant acidity. Further, they transfer this beer into stainless steel and add 10% fruit (pomegranate, red berries and others), creating variants of the original Weizen. The fruit rests with the beer for one month before either bottle re-fermentation or kegging into Bag-In-Box (BIB) (no CO2). The beer from the BIB was extremely pleasant, albeit the acidity meant that drinkability is low. I would like to try it with fish or slow-cooked meat. Another beer was the dry-hopped pilsner, this time fermented in a champagne bottle with the hops and having the yeast and hops shot out via classic ‘dégorgement’. Very elegant high CO2 beer. The last beer tasted was an imperial porter at 9.5% with 25% sour cherries added.

Good advice on sour beers: Lactobacillus is the easiest to work with and gives good results. Pediococcus is troublesome, as it likes to produce VDK and will not soak it up again. When working with sour beers, it is not permitted to enter other areas of the brewery that day. All packaging equipment is unique to the sour beers. Best to keep the sour beers totally separate.

There were also international breweries at the exhibition. One new exhibitor was our own Technical Editor Anders Kissmeyer with the Kissmeyer Beer. They used the Rimini Fair to launch the Kissmeyer brand in Italy, taking advantage of the fact that the many distributors all were present.

Niels Buchwald has worked in the brewing industry for 34 years. After graduation as a Mater Brewer from the Scandinavian School of Brewing in 1984, Niels was employed by Royal Unibrew, and had several different postings both in Denmark and abroad. In 2005 Niels left RU in order to establish Aarhus Bryghus which he has managed as head brewer and owner of since.